Oracle Primavera P6 offers two ways to define a critical activity in a project schedule. These are:

This article is mostly about item three – what is the difference between Total Float criticality and the Longest Path? There’s some confusion about this in the industry because unfortunately the term “Critical Path” and “Longest Path” often get used interchangeably. In reality they are two distinct methods of calculating critical path and P6 can do either.

First, let’s take a look at the location of the settings for these two options in Primavera P6 Professional.

Go to the Projects view of you Primavera P6 Professional application, select a project and then click on the Settings tab in the bottom layout.

You’ll see the default setting for defining critical activities in the area imaginatively named “Define Critical Activities”, in the lower area of the Settings tab.

This is the default behavior that will be offered to the scheduler when running the Schedule function.

However, this can be overridden at any time in the Schedule Options dialog, accessible from the Schedule dialog (accessed by clicking the F9 key or selecting Schedule from the Tools menu).

In here you select the Total Float less than or equal to [value in hours] or go with Longest Path. 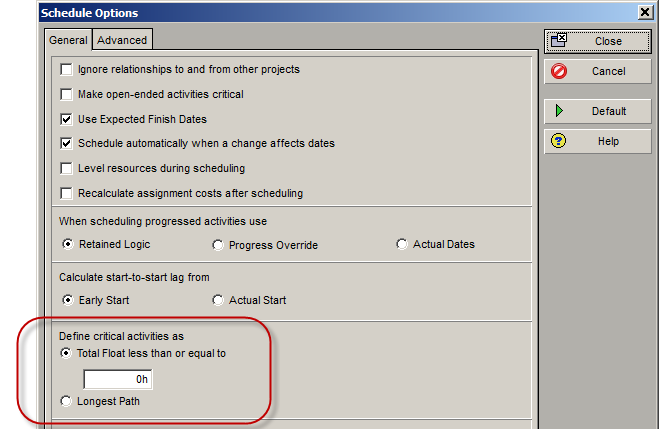 The difference between Total Float and Longest Path can be summed up in the following way. Total Float calculations look at the Total Float for each activity in the network. If its Total Float value is zero, then it will be flagged as a critical activity. However that doesn’t necessarily mean the activity is on the longest path; it just tells us that the activity is critical, and it may be so due to other factors.

The following example shows how the critical path appears when the Total Float method is used to calculate the Critical Path. Activity A1050 has a ‘Finish On or Before’ constraint that is equal to its planned finish date, so it and its predecessors are showing critical. If they slip, they probably won’t impact the end date of the project, but they will overrun their constraint date; which is why they are showing as critical from a ‘Total Float <= p=""> 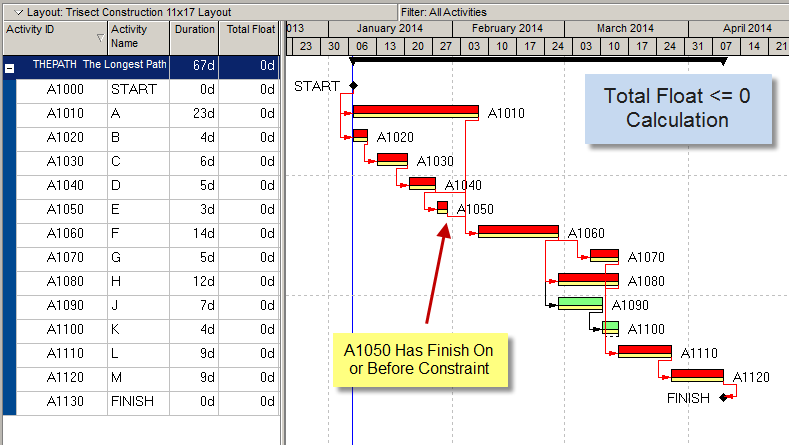 However, if the Longest Path method of calculation is used these same activities will not appear as critical because there is a constraint somewhere along that path. They will not in this case affect the end date of the project, so they are not on the longest path.

In this next example you can see the identical project schedule when it is calculated using the Longest Path method. 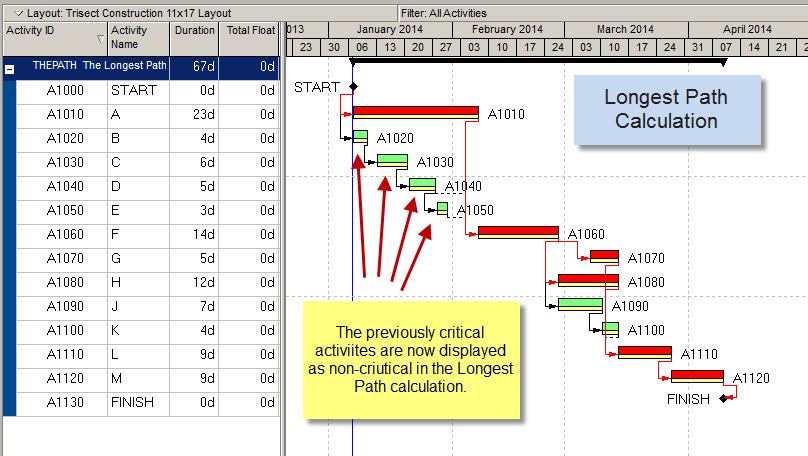 Previously critical activities are now showing as non-critical. Interestingly, they still have zero days Total Float, but P6 is ignoring them because they are not part of the longest path through the network.

The Longest Path through the schedule network will only consider activities as critical if they are on a contagious path from the start of the project to the end. Typically this is a single path upon which any activity that slips will impact the end date of the project.

Schedulers often use the Longest Path method when first developing the schedule. This gives them a clear idea of the activities that are driving the scheduled finish date for the overall project, without concerning themselves with complicating factors such as constraints, resource leveling, path divergence and convergence and other items that come into play when working a large and complex schedule.

Primavera P6 even has a “Longest Path” Boolean field that allows you to create a filter to see only activities on the longest path.

The Critical column and the Longest Path column will hold different values once a calculation of each type has been performed on the schedule at least one time.

With Primavera P6, you’re not committed to one method or another. At any time during the project lifecycle you can switch from Total Float to Longest Path depending on what you need to see. And at any time you can report on one or the other methods by using the Critical and Longest Path column values.