The collection of process fluids to empty equipment prior to their maintenance, of rain water, fire and wash water in a Process Plant entails the provision of drainage systems.

This subject is not often given proper attention and is engineered last.

It however entails several undeground networks whose installation will be one of the first activities at the Construction Site. In addition, before these networks are installed and the area is backfilled the plant erection cannot proceed for lack of access.

Underground networks can therefore be a major cause of delay of construction activities.

I therefore deemed useful to provide the following overview of a Process Plant drainage system.

The common Process plant drainage arrangement is depicted on the sketch here.

The following abbreviations are used:

Process fluids contained in equipment must be collected when equipment are emptied for their maintenance. The volume can be significant hence must be recovered.

The inventory is collected from the bottom of the vessels to a recovery vessel in the Closed Drain (CD) piping system where it flows by gravity.

The word "Closed" refers to the fact that the drainage system is not open to atmosphere.

The fluid is hazardous/flammable so that it must be piped in a closed piping system, not in contact with atmosphere, to the recovery vessel.

On the other hand, numerous operations, such as bleeding the small process fluid inventory between two isolation vaves to dismantle a filter or for inserting an isolating spade etc. will require small amounts of process fluids to be disposed off.

A plant will have numerous such small bleed-off points.

Due to the small inventory of process fluids contained, the drain valves will be open directly to atmosphere.

These drains are, for this reason, called "Open Drain" (OD).

They will be collected either by mobile equipment or dumped in the area water drainage.

Some will be lubricated by grease but most by lube oil systems.

Small amounts of oil will need to be drained from the lube oil systems occasionally.

That would happen, for instance, when dismantling an oil filter for cleaning etc.

They are found around pumps and collected, together with small process drains, by means of a drip pan.

As with Open Process Drains, as the inventory is small, these drains will be either collected by mobile equipment or dumped into the area water drainage.

Rain water falling on the plant territory needs to be collected so that the facility is not flooded.

Rain water will be collected only in paved area, roads, building roofs etc. Rain water falling on non-paved area such as gravel etc will not be collected as it will seep in the ground.

Fire water used for fire fighting, in particular for deluging process equipment, also needs to be collected, as well as wash water.

They will be collected, together with rain water, in the area water drainage.

Non Contaminated Water is routed and disposed outside the plant.

Contaminated Water is sent to the Waste Water Treatment facility (WWT), where the small amount of hydrocarbons it contains is removed, then discharged outside the plant.

In fact, not all rain water collected in process area is contanimated.
Indeed, some time after rain fal starts, all hydrocarbons/oil droppings on process areas paving will have been washed out by what is called the "first flush".
Only this first flush, typically the first 15 minutes of rain fall, needs to be sent to the WWT, what follows is Non Contaminated Water.

The segragation is achieved by the system, which comprises an ingenius automatic flow diversion device which routes the first 15 minutes of rainfall to the WWT and what follows to the NCWD.

The sketch of the overflow device is shown here.
The device routes the rain water to a sump whose volume is 15 minutes of rainfall. Once the sump is full rainwater overflows above a weir to the NCWD.

The concept of first flush allows to reduce the size of the CWD system.

The above is true for facilities handling hydrocarbons, such as a refinery, where the process drains and oil drains are compatible fluids (as both fluids are hydrocarbons).
A facility handling chemicals, such as Amine for instance, which is not compatible with hydrocarbons and connot be sent to the WWT, will have an additional drain network for such chemical.

The NCWD network, handling non hazardous/flammable fluids can be by open gutters while the CWD must be by closed system (undergound pipes).
Hydraulic seals must also be provided on the latter between fire zones to avoid fire propagation.

The size of the drainage network (cross section of pipes) will be calculated from the maximum of rain and fire water flow. Whichever governs will depend on the climatic data.

The CD network is a free draining (no pocket) network. The CWD (and NCWD) are sloped.

As the CWD (and NCWD) are collecting run-off water that sweeps along debris/dirt, they are provided means of cleaning, including access pits (manhole) at directional changes as well as clean-out connections. 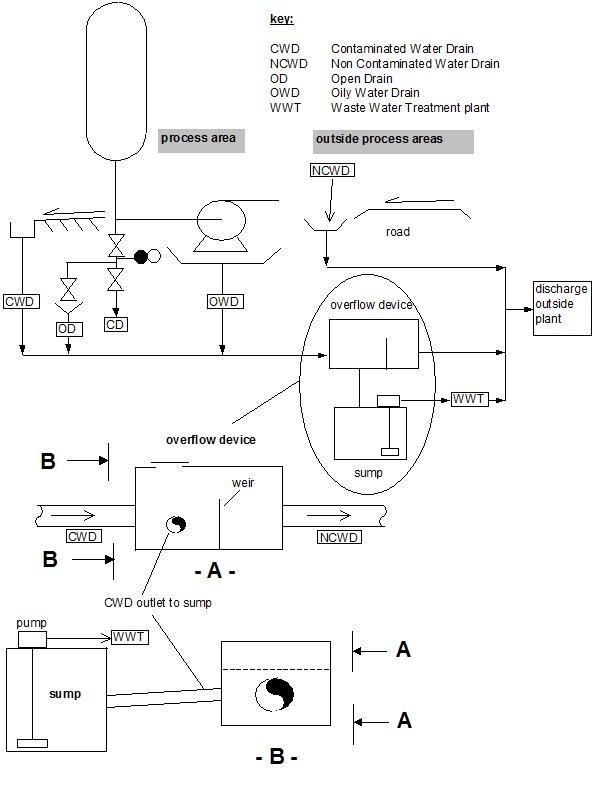